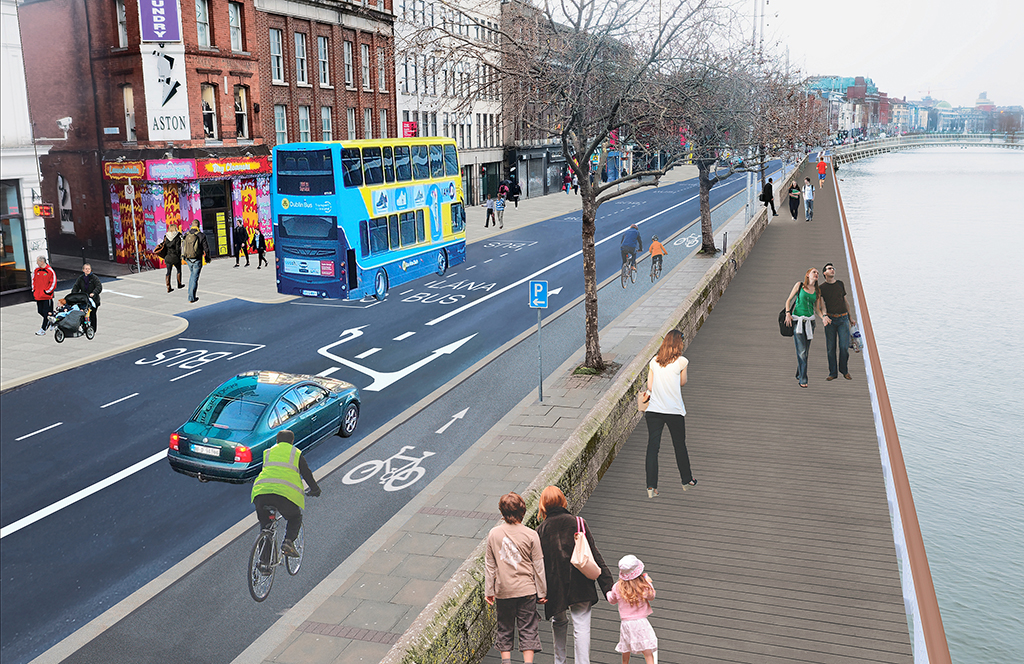 THE LIFFEY Cycle Route was adopted in the Dublin City Development Plan 2011-2017 with the promise that a continuous and segregated cycle route would be built within the time of the plan.

But the project has suffered many setbacks and, late last year, it was confirmed that the route is delayed yet again and now not expected to open until at least 2024.

That’s why IrishCycle.com started the LiffeyCycle.com petition which calls on the council to trial a cycle path on Dublin’s quays in 2020, and then look to build a wider quick-build cycle network.

Over 4,400 people have signed the LiffeyCycle.com petition and, on the back of this, councillors looked for a trial of the Liffey Cycle Route. But what the NTA and Dublin City Council officials have now proposed is far from a trial of a route – and far from safe.

People cycling in Dublin already have cycle lanes which end at bus stops and junctions. What the council is calling “interim measures” will continue this and likely make things more dangerous at junctions.

Under these interim measures for the quays, people cycling will still have to mix with buses at bus stops; mix with buses and taxis in sections of bus lanes; and, at junctions, there will still be conflict with left turning traffic.

Many people are quick to say that “something is better than nothing” but that’s not always the case with cycle route design.

There was a similar situation in London a number of years ago. Unsafe stop-start segregated cycle paths were installed without dealing with the conflict areas like junctions and bus stops. The result was that cycle routes looked more attractive, but the conflict remained – or worsened – and people died. It is senseless for Dublin to be making the same mistakes – there’s too much at stake.

Councillors need to have vision and implement a trial which is continuously segregated along the quays, even if this means disrupting cars on the north quays. Compromising on cycling safety just to maintain the same number of cars on the quays is pointless.

Cars are already seriously hampering the operation of the bus network and Luas Green Line and there are more buses and more trams on the way. Something has to give.

Cities all around the world of different sizes – some with fewer public transport options than Dublin – have shown that city centres become better places when you reduce the number of cars. The sky doesn't fall in. The opposite is true and cities become more attractive places to live, work and do business in. For the people who need to drive, there would still be ample routes to reach car parks and other locations.

Sky reveals trailer and premiere date for highly anticipated documentary Murder at the Cottage: The Search for Justice for Sophie

Sky has today revealed the official trailer for highly anticipated Sky Original documentary 'Murder at the Cottage: The Search for Justice for Sophie.'  The five-part...
Read more
Entertainment

Legendary Dublin director Jim Sheridan is to make his documentary series debut with 'Murder at the Cottage: The search for justice for Sophie', a...
Read more
Entertainment

THE incredible true story of Marie Curie. That’s how this one is billed and it’s a pity, because the story is genuinely remarkable, but...
Read more
- Advertisment -