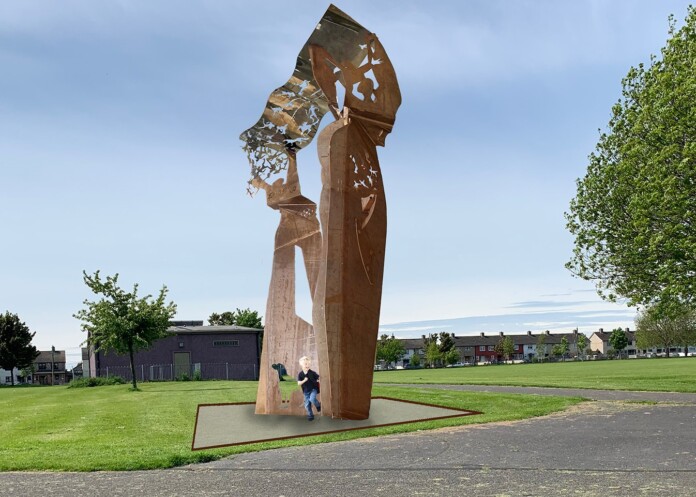 Dublin City Council and Sculpture Dublin have unveiled the sculpture which will be placed in Kildonan Park in Finglas.

The finished piece of art is the culmination of a 12-month process with Sara Cunningham-Bell being commissioned to create the sculpture earlier this year.

Cunningham-Bell says the sculpture represents the great people of Finglas, past and present, including Eliza Bishop, Kevin Barry, and musician Seamus Ennis.

Local Fianna Fail councillor for the area Keith Connolly welcomed the new sculpture, which was formally unveiled in an online ceremony in September.

“Sara has designed a dynamic, large-scale sculpture that will act as an inclusive landmark for Kildonan Park.

“She engaged with members of the public through workshops and meetings to get their feedback and opinions on the sculpture,” he said.

“It adds something new to the area and should work well with the overall development of the park in the coming years.

“The sculpture will become a focal point in years to come.

“The top part of the sculpture represents the river Fionn Glas and is made of polished stainless steel which is reflective.

“There are various people represented in the two figures each showing the diverse past, present and future of Finglas.

“It is anticipated that the sculpture will be installed in early November,” Connolly said.

A name for the sculpture has yet to be found with Sculpture Dublin asking the public to submit title ideas via its website (www.sculpturedublin.ie) for in Finglas Library until October 15.

However, the sculpture has drawn criticism from some circles in Finglas with local resident Gerry Buckley saying the piece is a “monstrosity.”

Although Buckley is not a member of the Kevin Barry Memorial Committee (KBMC)– a group of people who are campaigning for a statue of Barry to be erected in the park – he does support the cause and disagrees with local authority’s decision to not consider the proposal.

“I think the rejection of democracy is a real concern here,” says Buckley.

The KBMC surveyed 1,134 homes in Finglas and found that 984 supported its proposal.

The group says that Sculpture Dublin and Dublin City Council ignored its idea from the outset.

In its submission, the group says that the committee was “established by local residents of Finglas northwest 2020 to consider and explore ways to commemorate the centenary of Kevin Barry and remember the young 18-year-old lad who gave his life in an attempt to free his country from British subjugation.”

The proposed sculpture would be a bronze statue of Kevin Barry holding a hurl on his right shoulder accompanied by his dog, Cú.

The statue would be placed on a two-metre-high granite plinth while there would be an overall height of four metres which would “allow the artwork be viewed from any location in the park with a clear line of sight.”

Buckley says that “there is a lot going on” regarding the completed sculpture.

“Public representatives have made statements about how art cannot be parachuted into an area with proper prior consultation.

“But that is exactly what they are doing.

“The people of Finglas have said that they want a statue of Kevin Barry installed in Kildonan Park.

“This sculpture is unwanted.”

Buckley says the piece is “totally out of place” and the view of the park will be “tainted” by the sculpture’s size.

Northside People understands that the Kevin Barry Memorial Committee has commissioned an artist to create a sculpture of Barry to be placed in Kildonan Park.

The group has fundraised €20,000 to finance the piece which will be based on its original proposal submitted to Sculpture Dublin.

The sculpture will take seven or eight weeks to complete but exact details have yet to be announced.