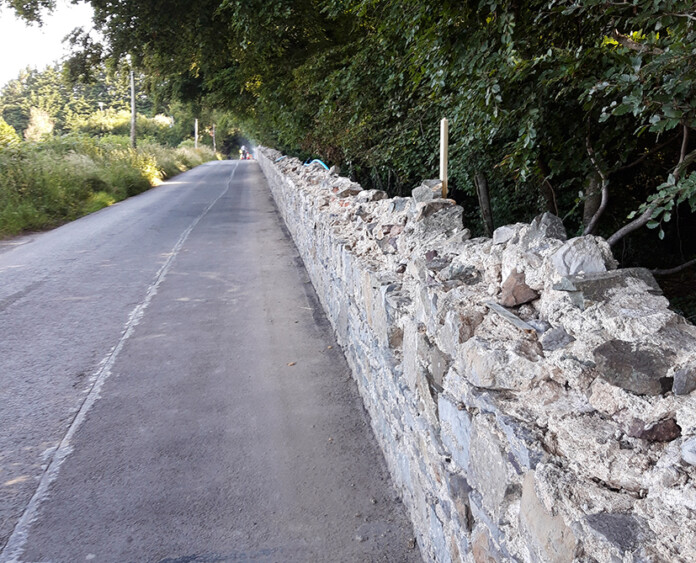 Fingal County Council has commenced conservation work on the estate wall around Newbridge House and Demesne in Donabate with the first phase of works focused on a continuous section of estate wall facing Hearse Road and Cobbes Lane.

The conversation works, which have been planned for some time and are included in the Fingal Capital Plan, are required because the estate wall has partly fallen into disrepair, according to the council.

The repairs will include the re-building of the rubble stone coping.

“This had been harled to protect it from the elements but has since been eroded and washed out by the penetration of rainwater over the years,” says the council.

“There has also been some damage from the impact of fallen trees so these sections will be re-built.

“The wall at Newbridge is stone built with lime pointing as was traditional practice and evidence suggests it was coated originally by a harling which is a thin render coating of lime, shells and stones to protect the stone from the elements.

“The original coating has been weathered over centuries and has largely disintegrated leaving the stonework exposed,” it says.

Analysis and survey works, including mortar analysis, preceded the commencement of works and found amounts of intact original harling still in place which suggested that this section of estate wall was covered in a thin render.

The formal courtyards beside the main house have a similar protective finish on them which is a sandy-coloured render with pebbles and shells visible on the surface and exposed by the action of weather.

Fingal County Architect, Fionnuala May, said: “It is our intention to carry out conservation works on the entire wall so, as this is the first phase, the conservation team will be working with the contractor to find the best balance of appropriate material which will mellow with age and best match the original.

“The contractor has been requested to provide sampling of harled finishes for review with the conservation team as we look to get the best possible finish for the estate wall.”

The works, which are intended to be completed by September, are being carried out by James Oliver Hearty & Sons whose previous conservation work has included Grange Castle, Rathfarnham Castle and Rathmullan Battery Fort.