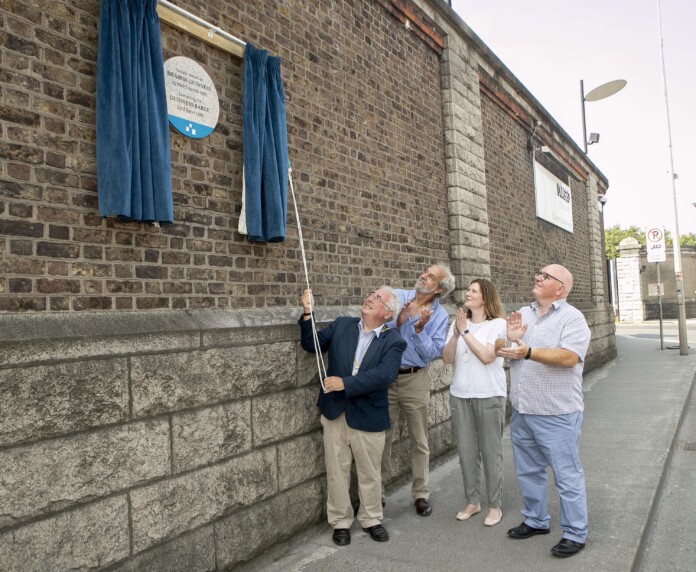 A plaque was unveiled today by the Deputy Lord Mayor, Joe Costello, at Victoria Quay, Dublin 8 to commemorate the Guinness Barges which stopped working in 1961.

The ‘puffballs of smoke’, as James Joyce described them in Ulysses, were a familiar sight as the barges passed under O’Connell Bridge, bringing stout from the brewery to Custom House Quay, for export to England and beyond.

Named for places around Dublin city and county, some of these vessels were to travel far from home, with The Farmleigh ending up in Scapa Flow, off the Orkneys, and The Fairyhouse playing a part in the flotilla of small ships that rescued the British Expeditionary Force from Dunkirk in 1940. 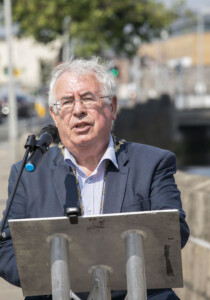 Speaking at the unveiling the Deputy Lord Mayor (pictured above) noted that most of our memorials are to commemorate significant events, or men and women who played a role in our journey to independence, or artists or writers or musicians who made their mark in their chosen field. ‘It is important’, said the Deputy Lord Mayor, ‘that we also commemorate the women and men who lived and worked on the streets – and rivers – of our city, who contributed to its social and cultural and economic life through ordinary everyday things, whose names are not inscribed in the history books’.

The barges which some older Dubliners may still remember to this day, date from the 1920s when a fleet of ten was built by Vickers – a subsidiary of Vickers & Armstrong – at the North Wall shipyard. The later barges had a special funnel which could be collapsed, allowing the barges pass under the bridges at high tide.

One hundred years ago the Guinness barges were prevented from unloading their cargo as the Custom House burned, and as the battle for the Four Courts raged over the Liffey in 1922, the barges sailed on.

The Guinness barges, or rather the men who worked on them, witnessed the most historic events in our city’s history. As the hours of work were dependent on the tide, the crews had to be issued with passes to be out and about during curfew, during the time that the Black and Tans patrolled the streets.

The development of breweries abroad, and the switch to Lorries, brought the era of the barges to an end and the last sailing, of The Castleknock, from Victoria Quay, was on 23rd June 1961.

The City Council plaque replaces a previous Inland Waterways Association one, and the Chair of the Association, Jim O ‘Riordan, Chair of the Association, thanked the City Council for agreeing to their proposal to replace it, saying ‘IWAI are delighted to see an important chapter in Dublin’s maritime life remembered and celebrated. The Guinness barges and their crewmen were an iconic feature of city life for almost 90 years and todays unveiling represents a co-operative effort by Dublin City Council, Diageo Ireland and IWAI to put in place a permanent reminder of past times.’

The decision to erect the plaque was made by the Dublin City Council Commemorations & Naming Committee. Representing the Committee, Councillor Vincent Jackson said: ‘The Commemorative Plaques scheme allows the City to formally commemorate people and events who have made a significant contribution to the life of Dublin. The Commemorations & Naming Committee had no hesitation in agreeing to the proposal to commemorate the Guinness Barges, and by extension the men who sailed them, with this commemorative plaque’.