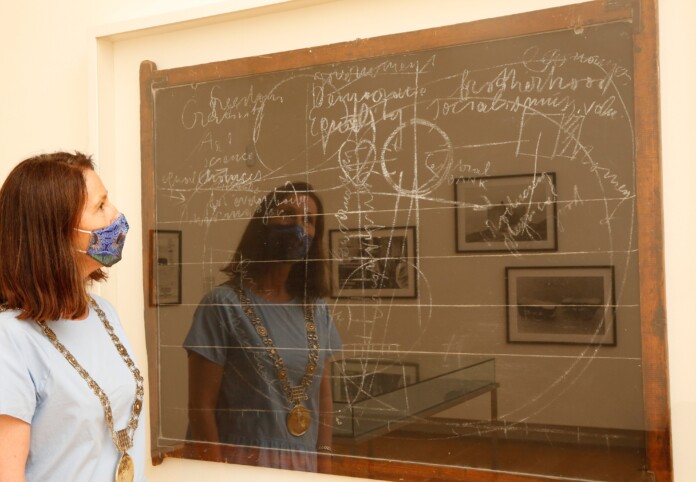 Hugh Lane Gallery celebrates the centenary of the birth of Joseph Beuys (1921-1986), the controversial and highly influential German artist with the exhibition, From The Secret Block to Rosc.

The exhibition was launched on Friday by the Lord Mayor of Dublin Alison Gilliland. 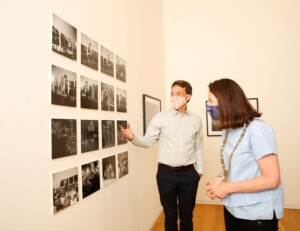 In 1974, the Hugh Lane Gallery organised the first ever museum exhibition of Beuys’s work in Ireland, The Secret Block for a Secret Person in Ireland.

During the exhibition, on the 15th October, Beuys gave one of his famous, passionate lectures discussing the potential of art to transform society and encouraging artists to be active agents in in striving for a better world.

He believed everyone should be free to realise his or her creative potential.

He illustrated his theories with drawings on three school blackboards provided by the neighbouring school Coláiste Mhuire which the gallery subsequently acquired.

From the Secret Block to Rosc will exhibit Beuys’ blackboards alongside a wealth of archive material including the recently acquired series of photographs documenting Beuys’s famous visit to Ireland taken by Caroline Tisdall.

The exhibition will illuminate and reflect on Beuys’s relationship to Ireland, his thinking around energy, healing and the Celtic world and the place of teaching and dialogue in art practice. The exhibition is part of the series of worldwide events marking the centenary of the birth of Beuys on 12 May 2021.

In response to From the Secret Block to Rosc, the Gallery collaborated with street artists Asbestos who created the large mural Pass Freely, on the side wall of the AIB building on O’Connell Street Upper.

This large figure is created from painted burnt matches each one marking the tragic death of a Covid victim. On the hoarding below is the quote from Joseph Beuys: Pass Freely From One Level of Existence to Another.

Joseph Beuys: From the Secret Block to Rosc runs until October 31st in Hugh Lane Gallery