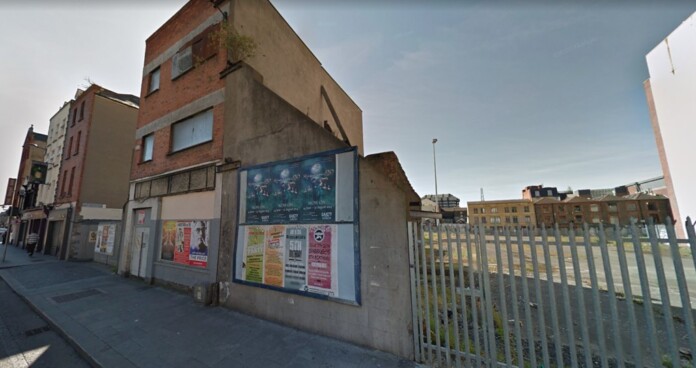 Dublin City Council is planning on selling a plot of land on Upper Abbey Street for €100,000, after over 80 years of largely ignoring the site.

In 1939, Dublin Corporation purchased 35 Upper Abbey Street in expectation that it would be widening the street.

The land was then leased back to the previous owner, Simon Watchman under the agreement that when the local authority decided to begin the works, Watchman would have to vacate the premises.

However, Dublin Corporation never widened Upper Abbey Street, and for over 80 years the land was largely ignored by the authority, being occupied by Watchmen, his successors, and then various other people.

According to the signed agreement, Watchman was allowed to “occupy same free of rent or any other charge or expense of any kind and to erect thereon a one-storey shop which he hereby agrees to remove immediately after the adjoining houses are set back to the new street frontage.”

Dublin City Council says because Upper Abbey Street was never widened, its interest in the site was “nominal,” allowing the occupants to operate rent-free.

In 2005, Cinema and General Publicity Limited entered into discussions with the council on purchasing the site but an agreement was not reached.

In 2019, the site came to the council’s attention after learning it was being incorporated into the plans of a private developer.

“It came to light that the site of the by-then demolished premises at 35 Upper Abbey Street (part of) was enclosed within a larger development site in the ownership of Abbey Cottages Limited,” it said.

“Dublin City Council had not been formally made aware of this nor was its consent to the inclusion of the land in a development sought.

The council says that a valuer entered into negotiations with Abbey Cottages Limited and agreed a price of €100,000 for the site.

However, a spokesperson for the council did not reveal if the price agreed was below market value for the site.

This is the second time in recent months that the council has disposed of lands in its possession since the early 20th century.

In June, the council agreed to sell two derelict properties in Smithfield for €35,000, which was well under market value.

The properties, which are located on North King Street, were purchased by Dublin Corporation in 1949 to also accommodate the widening of the street.

At the time, the local authority leased the properties back to the previous owners under the condition that they would be evicted once the road widening works began.

However, the project was abandoned and the houses were occupied by squatters and a car parts business for many years.

In 2007, the owner of the site to the rear of the property, who had possession of the land, claimed ownership under adverse possession, otherwise known as “squatter’s rights.”

In 2019, Yellowline Limited informed the council that it was now the owner of the site to the rear of the property and wished to buy out the council.

The council’s chief valuer said they “haven’t got a leg to stand on legally.

“If we go to court on an adverse possession case we will lose, that is the legal advice.”

The firm originally offered €5,000 to buy out the council, with that price eventually rising to rising to €35,000.

It is understood that Yellowline Limited intends on