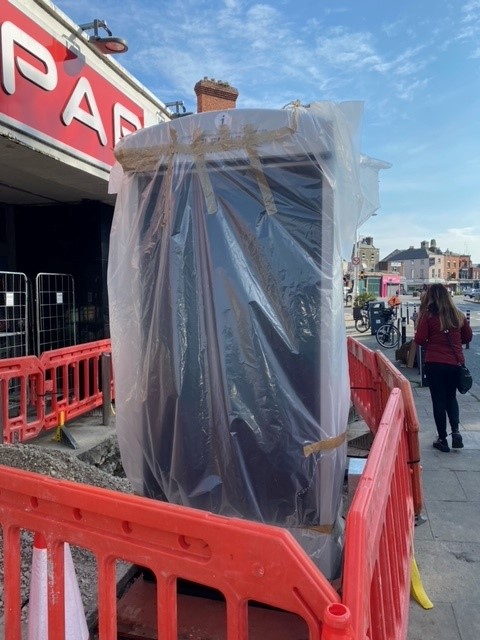 Concern over placement of new digital phone kiosks in Dublin

As part of its city-wide project, phone network Eir has placed a digital phone box on Annesley Bridge Road in Fairview.

This phone box, or “digital pedestal”, is one of 22 that have been introduced to various Dublin streets in recent weeks.

According to the company, the kiosks are “suitable for wayfinding and where the council can advertise upcoming festivals and services, all housed in a modern aesthetically pleasing unit.”

They are “designed to play a role that is more suitable to city life today, not only as a point of connectivity, but as an information system for the local authorities services including mapping systems for visitors and residents when life returns to normal.”

However, similar to other kiosks, the Fairview one has drawn criticism for its positioning, and lack of space it allows for wheelchair users to pass.

Damian O’Farrell, Independent councillor for Clontarf raised this issue at a recent Area Committee meeting, saying that the kiosk does not comply with Irish Wheelchair Association (IWA) guidelines for wheelchair permeability.

The guidelines stipulate that at least 2000mm should be left clear beside street furniture to allow for wheelchair users to pass.

The kiosk on Fairview only allows 1780mm on one side and 1330mm on the other.

“We request the CEO of DCC to organise with Eir the removal of all newly installed Eir Digital Payphone Units in the city that do not comply with the IWA/Best Practice Access Guidelines,” O’Farrell said at a recent meeting.

“I contacted the IWA National Access Programme Office post the installation of an Eir Digital Payphone Unit on Annesley Bridge Road, Fairview Dublin 3 and was told this was the first time the issue had been raised with them.

“The IWA sent me the Best Practice Assess Guidelines below which stipulates a clear path width of 2000mm.

“The Eir Digital Payphone Unit in Fairview as an example has a clear path width of 1780mm on one side and 1330mm on the other. i.e. the unit is in the middle of the footpath and clearly doesn’t comply with the IWA Access Guidelines and should be removed without further delay,” he said.

In response, the council said it would not be seeking the removal of the kiosk due to Eir obtaining the appropriate license to install the booth.

“EIR have a T2 for this installation, therefore, EIR are compliant,” it said.

O’Farrell said he did not agree with the council’s decision.

“I’m really disappointed that Eir have placed a wheelchair accessible telephone kiosk bang in the middle of the footpath at Fairview with no regard for the Irish Wheelchair Association’s National Access Guidelines for footpaths.

“However, I’m even more disappointed that DCC Planners have let them.

“The planning application was primarily for a telephone kiosk yet the planning assessment report only refers to DCC’s Outdoor Advertising Strategy, City Development Plan 2016-2022.

“It makes no reference whatsoever to the fact telephone kiosks are categorised as ‘street furniture’ in our current development plan and should I believe, have been assessed under that criteria also.

“I note every new Eir telephone kiosk has been treated similarly by DCC planners,” O’Farrell said.

The councillor says he has contacted the city council’s chief executive officer Owen Keegan “regarding the planning process which granted permission for these telephone kiosks as I believe the process failed to take into account many of our city’s planning policies.

“In reality, these luminous footpath advertising billboards do nothing more than add to street congestion and clutter in these Covid times while masquerading as payphones, or as they have been referred to in Australia as ‘Trojan Horses’.

When contacted for comment, Eir told Northside People that it “is always looking at ways in which our infrastructure can better serve the community, Eir is working with county councils to agree on the best use of legacy infrastructure.

“The new digital kiosks will be placed where the old public phone boxes were positioned, they have a smaller footprint, taking up less space on the pavement.”

The IWA had not responded for comment by the time of publication.