Home Dublin ‘Centenary of the Burning of the Custom House Remembrance Event’ to take...
Dublin 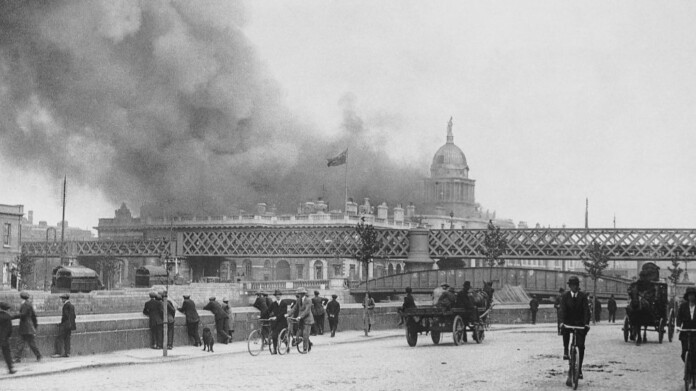 In what was the IRA’s largest single operation during the War of Independence, it then set fire to the building.

Nine people – five IRA members and four civilians – were killed in the gun-battles, which took place in and around the building.

The Custom House, one of the British Government’s most important administrative buildings in Ireland at the time, was completely destroyed.

Its administrative records were also destroyed. Six weeks later, the Irish and British sides in the conflict reached a truce, thus marking the end of the War of Independence.

As part of the Government’s Decade of Centenaries, the Department of Housing, Local Government and Heritage will today mark the Burning of the Custom House.

It will hold a remembrance event, held in conjunction with relatives of both those who took part in the attack and civilians who were killed in the attack.

Due to public health restrictions, only 15 people can attend the event.

The event will be broadcast on the RTÉ News Channel, RTE.ie and on RTÉ News across social media. It will also be steamed live on the Department’s Facebook channel (@DeptHLGH).

Speaking in advance of the event, the Minister for Housing, Local Government and Heritage, Darragh O’Brien TD, said: “Today marks the one hundredth anniversary of one of the most significant events of the War of Independence. It is with a strong sense of history that my department and I, as custodians of the Custom House, remember the nine people who were killed in the attack, whilst also celebrating this remarkable, two hundred and thirty year old building. I am very pleased that my Department is playing its part in our Decade of Centenaries by remembering this event.”

The Minister for Tourism, Culture, Arts, Gaeltacht, Sport and Media, Catherine Martin TD, added: “We are now in the most sensitive and complex period of the centenaries programme.  I welcome today’s commemoration, prompting all of us to reflect upon the significant historical event that took place at the Custom House a century ago.  When exploring our history we have a responsibility to recognise the value of ideals and sacrifices, including their cost.  On this significant centenary, we remember the nine people who lost their lives at the Custom House and the subsequent impact on their families and the campaign for independence.”

As part of its work to celebrate the Custom House’s architectural and historical significance, the Department – in conjunction with the Office of Public Works, and with the support of Fáilte Ireland – are carrying out a refurbishment of the Custom House Visitor Centre, with the installation of new exhibition and interpretation displays. The Visitor Centre will cover not only the 1921 attack and fire but also the history of this remarkable building. Unfortunately due to Covid-19 Restrictions its opening has been delayed until later in 2021. Details will be announced later this year.

Commenting on the initiative Minister O’Brien said: “The new permanent visitor centre in the Custom House will properly celebrate James Gandon’s architectural masterpiece, while also giving a detailed account of the 1921 attack. This will be really significant for Dublin’s North Inner-City. We hope to offer a very informative and interesting visitor attraction that will be visited by many. And later this year, when Covid-19 restrictions are hopefully lifted, my Department and I will be engaging directly with schools in the area around the Custom House, making history come alive for our students.”

The Minister of State with responsibility for the Office of Public Works, Patrick O’Donovan TD, added: “The Custom House is one of Dublin’s most accomplished Neo-classical buildings and it has been in the care of the Office of Public Works for over a century. In the aftermath of the fire on 25 May 1921, the OPW reroofed the building and skilfully reinstated its iconic dome, and through this, as well as through the careful conservation of the exterior and interior over the decades, it has ensured that the Custom House is preserved for generations to come. The OPW guiding team looks forward to sharing the rich history of this building with visitors when the new visitor centre reopens later this year.”