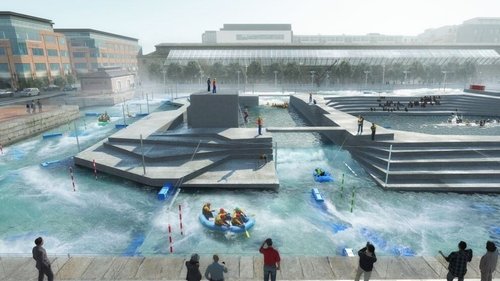 Dublin City Council has revealed that plans to develop a white-water rafting centre at George’s Dock is still progressing despite the Government refusing to allocate €19m in funding to the project.

The council was responding to a question tabled by Sinn Fein councillor Daithí Doolan asking if the project was still going ahead and if it could be re-located to Cherry Orchard.

“Contrary to recent media coverage regarding the George’s Dock White Water project not receiving support from the URDF Call 2, it is still very much a live project and work is progressing to bring the project to the construction stage,” says the council.

“The City Council has recently commenced stage one (Expressions of Interest/ Prequalification) of a two stage Procurement process for the appointment of a contractor to construct the proposed Georges Dock White Water project. The closing date for Stage 1 Submissions was 12 March 2021.”

The local authority said that all submissions will be “reviewed by an assessment board shortly to decide which firms have the necessary skills” to carry out the development.

Successful applicants will then be invited to submit a tender for the project at stage two.

“It is expected that stage two will commence during Q2 of 2021 and will take several months to complete.”

It will be at this stage that the council will have an “actual tender cost and will then decide whether or not to proceed with the project.”

The decision will be based on the estimated cost and confirmed funding for the proposal.

“If a decision is made to proceed, it is hoped construction will commence in Q1 of 2022 and will take 18-24 months to complete.”

The council said that Le Fanu Park in Ballyfermot was considered as an appropriate location for the centre but George’s Dock “became the preferred location due to its City Centre location which is ideal for a tourism.”

“George’s Dock is still the preferred location for the facility and no alternative sites are being considered for the development at this time.”