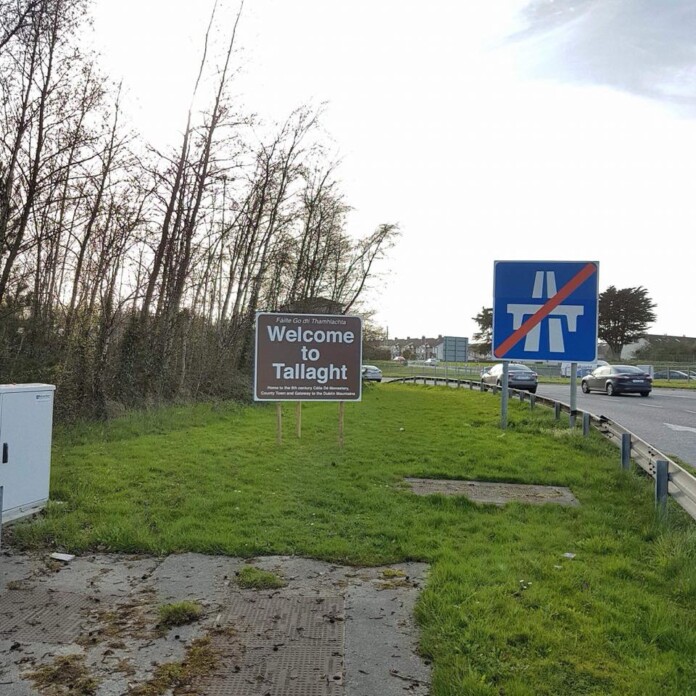 After 8 years of campaigning, Tallaght locals still looking for a welcome sign

Tallaght residents say they are wondering what is causing the delay in installing welcome signs at main roads, three years after one was removed by South Dublin County Council.

In 2018, local residents, as part of Tallaght Community Council (TCC), installed a ‘Welcome to Tallaght’ sign at Balrothery Cross but two days later, the county council removed the sign.

Tara De Buitléar, TCC member and Tallaght resident says the situation has been dragging on for many years.

“There was a ‘Welcome to Tallaght’ sign on the Old Tallaght Road as you would expect for any town or village up until the 1990s.

“The sign was as never replaced despite Tallaght being a major population centre in Dublin and the county town of SDCC,” she says.

De Buitléar says that TCC has been campaigning for new signs to be erected since 2013 but progress has been slow.

“TCC has requested this gap be addressed very regularly since 2013.

“The request has been refused repeatedly as SDCC was running a tourism project to produce tourist signs. However, that project has failed to produce any new signage to date.”

In 2018, after five years of campaigning, TCC erected its own sign at Balrothery Cross, a main arterial road into Tallaght.

“TCC were frustrated after several years of being declined.

“We funded the sign artwork (sing the national signage standards) to install the ‘Welcome to Tallaght’ sign at Balrothery Cross, the prominent gateway into Tallaght from the M50, which has traffic flows of 25 thousand cars daily,” she says.

“Sadly, that was removed by the authorities after just two days. This sent another negative message about value to the whole community.”

In 2020, the South Dublin County Local Community Development Committee was awarded €1,000 through the Community Enhancement Fund 2020 to install welcome signs at four roads leading into Tallaght.

In January this year, councillor Mick Duff asked the council to provide the details of the signs and to reveal if a heritage sign would be installed in Tallaght Village.

In response, South Dublin County Council said: “Details have been sought as to the proposed construction, content and locations of the signs.

“When these are available a report will be issued.

“It is proposed, at a later date, to implement a heritage signing scheme when the scope and range of the scheme have been fully considered and developed.”

“Once the engagement is finalised and designed, the signs will be installed and they will be part funded by the community department,” the council said.

“These signs will be in accordance with the Councils Signing Strategy.”

However, De Buitléar says that Tallaght Community Council has not had any correspondence from South Dublin County Council “in a long time.”

“We would obviously be happy to be contacted by them to expedite a swift installation of the nationally recognised brown heritage signs.”

“TCC would like the national heritage standard signage used for most welcome signs, commonly known as “brown signs”.

“These are at the entry into every town and village the length and breadth of the country,” she says.

“Every community needs to feel their street, village or town is recognised, a place to be proud of and officially valued.”

De Buitléar says that the “absence of a very simple ‘Welcome to’ sign” indicates the council’s reluctance to “clearly signpost Tallaght.”

“This reluctance was seen by many in the community as signifying a lack of official value and pride in Tallaght.

“We are hugely proudly of our hometown,” she says.

“It’s high time Tallaght was officially back on the map. It would give the whole community of Tallaght an instant lift when it is needed the most after a year of lockdown restrictions.”

Skerries RNLI volunteers rescued a kite surfer that got into trouble near Rush yesterday afternoon. A Skerries RNLI spokesperson said that the crew "launched their...
Read more
Dublin

A man who was found with nearly half a million euro worth of cocaine and heroin in his bedroom has been jailed for four...
Read more
- Advertisment -