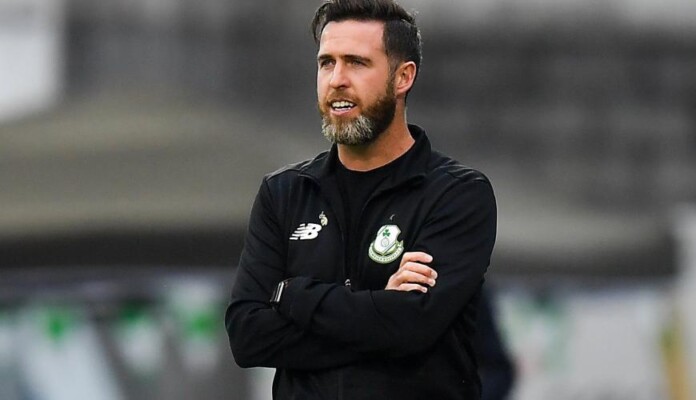 Champions Shamrock Rovers travel to Drogheda United tonight (KO 7.45) where they will look to extend their unbeaten run to 28 league games and beat the record set by rivals Bohemians in 2008.

Q. Given how late the team left that one against Longford, were you delighted and somewhat relieved to get the win in the end?

A.”We’re delighted to get the win because like I said on the night and watching it back again, we were poor in the first half.

It was a terrible start to the game from a Rovers point of view conceding the penalty after just five minutes. What was your view of it?

“It’s a penalty, and the penalty incident summed up how we started the game. We were slow and sloppy in everything that we did and we were for that incident as well and got punished.”

Longford were well organised and looked up for it coming to Tallaght. Did they present a different sort of challenge to Derry the week before?

“I don’t think so, it was more down to us not being at the races and not at our levels in the first half. They came and played how we expected them to play in terms of set up, formation and how they approached it. It was similar to Derry. So we knew what was coming but we were just below our levels and if you’re below your levels against anybody in this league you’re in for a tough night and the first half was.”

We’ve not often found ourselves a goal down at half-time in recent times. What did you say in the dressing room?

Your double change with Rory Gaffney and Gary O’Neill coming on made an instant impact as we started the second half very well and nearly scored twice straight away didn’t we?

“We started well. It was more like us. We started on the front foot, were more aggressive in everything and played to our level. Then came a flurry of chances and openings so the second half was a lot better.”

Graham Burke stuck the penalty away for the equaliser. How did you think we played in search of a winner from that point?

“I thought the whole second half we were excellent. When you watch it back we were really good and controlled the whole second half. They got out once or twice from kick outs but other than that we played the game in their half. You have to be patient, keep probing and moving because at times there’s eight or nine in the box defensively. So you’re waiting for that opening to open up and the players did that really well. They created really good chances.”

Dylan Watts missed a golden opportunity in injury time but thankfully Sean Gannon popped up with the winning goal from the free kick after that. Is it nice to see another new signing find the net?

“It was actually a really good save from the goalkeeper from Dylan’s shot. He’s hit it really well and the keeper makes a really good save with his feet. But then we get the free kick and I’m delighted that Sean Gannon has put it in because I thought his performance on the night was very good. You can see Sean is getting stronger and more used to the system with each game he plays.”

That put Rovers top of the league, despite not being at our best on Saturday. We’ve equalled a modern era record of 27 league games unbeaten (Bohemians in 2008). Do successful teams sometimes need to grind out those sort of wins?

“In the first half we were below par, we know that but in the second half we were excellent. So we’ve got to understand that teams have a right to come and play the game and try and beat you. This team in the last two years have very rarely had off nights so I think they’re allowed have a bad 45 minutes considering how consistent they’ve been in how they’ve played and how well they’ve played. I think massive credit to the players for equalling that record and hopefully we can go and create our own record on Tuesday night. It’d be a fantastic achievement for the players because they’ve been excellent for the best part of two years. ”

The games are coming thick and fast and it’s another newly promoted club we’re up against on Tuesday. What do you make of Drogheda so far?

“They’ve been good. I’ve watched their games and they’ve played well. The pitch up there is always a bit of a leveller in terms of the size of it. It’s going to be a difficult game but it’s one that we’re looking forward to.”

What’s the latest with injuries?

“Neil Farrugia is still out and Joey O’Brien is still a few days away. We’ll need to check on Sean Hoare this morning but I don’t think he’s too bad at all.”