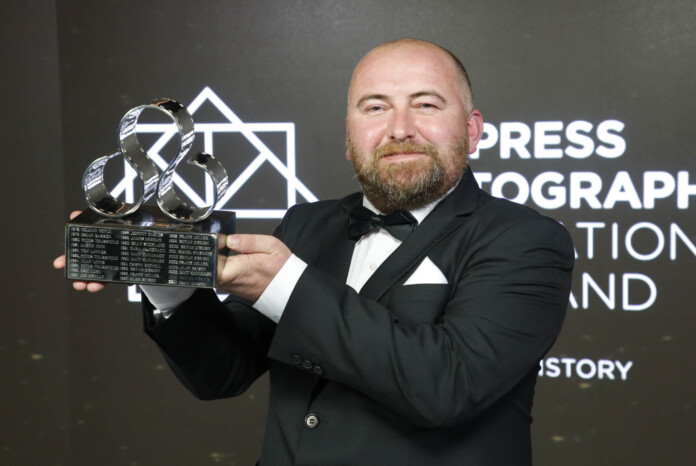 The 43rd annual ‘Press Photographer of the Year Awards’, were announced on Friday evening during a specially directed live stream awards ceremony presented by broadcaster Miriam O’Callaghan alongside Crispin Rodwell, President of the Press Photographers Association of Ireland.

The ‘Press Photographer of the Year’ 2021 title was awarded to James Crombie of Inpho Photography, whose portfolio the judges cited as “A marriage of superb features work, creative portrait work and solid sports photography.”

James received two category awards – first prize in sports action for his sublime image ‘Foggy Semi-Final’ as fog descended during the All Ireland Senior Football Championship Semi-Final between Mayo and Tipperary and second prize in sports non-action for his iconic image ‘He is Risen’ (abnve) taken as a fan watches St. Brigid’s play Boyle in the Roscommon GAA Senior Football Championship Semi-Final over a graveyard wall.

To mark the profound and tragic events of the past year, shaped by the Covid-19 pandemic, members of the Press Photographers Association of Ireland are forming a historic visual record of Ireland during the past unprecedented year.

The collection, which will be shortlisted by the judging panel, will go on display online as well as being donated to the National Archives and National Library System.

This stark collection of historic images will pay homage to those who have sadly lost their lives, those working tirelessly on the front line and all effected by the pandemic.

During her address, Minister for Tourism, Culture, Arts, Gaeltacht, Sport and Media Catherine Martin T.D. said; “Press photography allows the audience to witness history, sometimes as part of a fleeting moment, in a visual image that often informs us as much as a written narrative.

“Many of the remarkable photographs entered for this year’s awards, now in their 43rd year, are striking or heart-breaking while others are uplifting and inspiring.

“That is what photography at its best does; it can drive us one moment to silence and the next to laughter.

“The Covid Collection will be an important visual record of what will be a very notable and challenging time in our history.

“It is admirable that it will be curated and archived by the National Library of Ireland-one of the National Cultural Institutions under my remit-who will be the custodians of these records for generations to come.

“I am honoured that the PPAI have offered to donate this unique collection covering the Covid-19 pandemic to be preserved as part of the visual history of the State”.

Speaking about the awards, Crispin Rodwell, President of the Press Photographers Association of Ireland, said:

“Many congratulations to our colleague James Crombie on being named the ‘Press Photographer of the Year’ 2021 with his tremendous portfolio of images.

“Tonight’s awards have been very different to how they are usually marked, but we are delighted to share the awards with such a wide audience online.

“I would also like to take this opportunity to thank everyone who took part in the ceremony and really brought it alive.

“It has been an extraordinary past twelve months in the country’s history, during which the members of the PPAI have served their vital role in producing a visual record of the pandemic, which will be preserved in the nation’s archives”.

Depending on government and HSE guidelines, the exhibition may go on tour to various libraries and venues around the country throughout the year.