Shamrock Rovers are crowned the kings of Irish football

SHOUT it from the rooftops…The Hoops are champions of Ireland again!

The absence of their loyal and passionate fans did give the celebrations a slight anti-climatic feel, but this was still a night manager Stephen Bradley and his excellent team will remember forever. 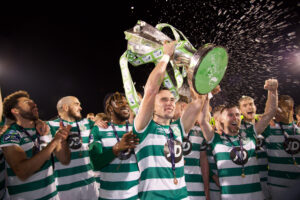 Their first title triumph since 2011 has been achieved in a style and a manner that harks back to the legendary Rovers teams of yore.

That they have been the outstanding team in the Premier Division this season is undeniable.

They’ve also made history by going unbeaten all season, the first club to do so since previous Rovers teams had their own perfect seasons in 1925 and 1927.

What this group of players might achieve in the future is what Stephen Bradley (pictured below) was really keen to focus on following the trophy presentation. 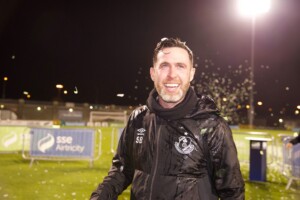 “This gives us more hunger to do it again next year,” he said following the 0-0 draw with St Patricks Athletic that served as the curtain raiser to the night’s celebrations.

“We are only getting started, we really are. We had a staff meeting about next year and how we are going to get better.

“We got a little taste of it and I really believe that this team can go and dominate over the next few years. I really do.

“I’m delighted for the players as they’ve had to wait and be patient. They have worked so hard all year and this is what you build for, even if it’s a shortened season.” 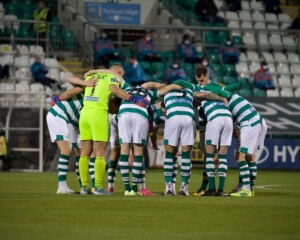 Another high point on a night of celebration was the welcome return of talismanic playmaker Jack Byrne following a battle with coronavirus.

“It hit me hard, it’s no joke,” he told RTE following the game.

“It’s a serious issue going around at the moment, I was unfortunate that I got a bad dose of it.

“For three or four days I was struggling with my breathing.

“You don’t come back straight away.

“It takes a few weeks.

“I’m just glad to be out the other side and happy to be alive.

Following the presentation of the league trophy there was a touching moment when the Rovers players gathered together for a picture holding a tricolour adorned with the words ‘RIP BIG DEC’ in memory of legendary Hoops Declan Keogh who sadly passed away in June.

The manager’s thoughts can now turn to the push for a league and FAI Cup double.

A cup quarter final clash away to Finn Harps next Friday awaits as The Hoops go in search of their first double since 1987.

This season like no other is not over yet…